My research involves the behavior 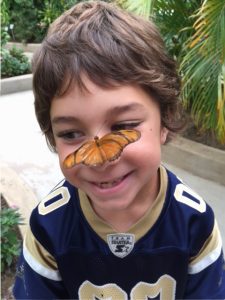 al ecology of arthropods, the most abundant and diverse group in the animal kingdom. Arthropods occupy nearly every ecological niche in marine, freshwater and terrestrial habitats, and their extraordinary evolutionary success can be partly attributed to the remarkable diversity of their mating systems. In many species, males exhibit exaggerated physical traits, and females mate preferentially based on the male’s expression of these traits. One of the most fundamental questions in biology is: why do females choose to mate preferentially with males based on traits that have no function in terms of survival? Darwin explained this phenomenon by creating a companion theory to natural selection called sexual selection, in which the possession of such traits ultimately leads to differences in reproductive success through female choice (intersexual selection) or male-male competition (intrasexual selection). Sexual selection is an important area of behavioral ecology that explains phenomena including exaggerated male traits, female mating preferences, precopulatory courtship signals, and postcopulatory sperm selection. I am primarily interested in the reproductive behavior of arthropods, particularly species that are sexually dimorphic – that is, where strong competition for mates has ultimately lead to divergence in the appearance of males and females.

Sexual selection theory makes different predictions about the number of mates each sex should take to maximize lifetime reproductive success. For males, the generally small investment of both time and resources result in the best strategy being to fertilize as many females as possible. Until recently, the opposite was widely believed to be true for females, who usually maximize their fitness by selectively taking fewer mates of high quality. There are often significant costs associated with promiscuity, and it is not uncommon for one mating to provide sufficient sperm for a lifetime’s output of eggs. In the last two decades, however, molecular approaches have revealed that multiple mating by females may actually be more prevalent in nature than previously thought. The fitness advantages that females derive from mating multiply are broadly classified as direct or indirect benefits. Direct (phenotypic) benefits are the result of non-genetic quantities that have a positive impact on the survivorship and offspring production of the female. Such benefits can include enhanced paternal care, the transmission of anti-predator defensive chemicals, and the acquisition of nutrient rich nuptial gifts. In species with nuptial gift-giving (i.e., non-genetic material is transferred at mating), the usual costs of multiple mating may be greatly reduced or completely eliminated. Thus, there appears to be substantial evidence that polyandry can be at least partially explained by the acquisition of material benefits. Indirect (genetic) benefits are those that are reaped in the next generation in the form of increased survivorship and mating success of sons and daughters. Many hypotheses regarding the genetic benefits of polyandry have been proposed, though relatively few have been tested experimentally. In some cases where females mate multiply, sperm from the highest quality mate is used preferentially; this postcopulatory selection leaves open the possibility that females accrue direct benefits from multiple males while having offspring with the highest genetic quality. One of the main goals of my research program is to examine how the costs and benefits of precopulatory choice and postcopulatory selection shape the evolution of mating systems.

* For more on specific projects and organisms, scroll down the Research tab above.